UK does not fit into the Western Civilization!

Prime Minister of the United Kingdom of Great Britain and Northern Ireland Your Excellency,

I’m addressing Your Excellency as a husband and the father of a four months old son, who is unable to comprehend the fact, that in a civilized country, which, until now, Great Britain had appeared to be, in the eyes of the law the state prohibits the parents from saving the life of their baby, who is still younger than two years of age, Alfie Evans. While following, with bated breath, latest news about verdict after verdict of soulless courts, which with extraordinary arrogance maintain that it is in the best interest of this little boy to simply, as soon as possible, die, I wonder, what has happened to this great country that United Kingdom once was? How has it come to, that a state with such amazing and long lasting traditions of democracy and freedom, a country famous for its liberties and its wise, independent judiciary, a country that has given the world William Shakespeare, Isaac Newton and Florence Nightingale, is committing a barbaric act of judicial murder on a defenseless infant, while the entire world is watching? It is even more unusual and difficult to understand, given that the British National Health Service, which is going against the medical ethos, is not willing to save the little patient’s life, does not have to do so, since more sensitive to the Alfie’s fate Italians decided to take matters into their own hands and offered help. Why then does the British court, acting like the organ of the worst of the totalitarian states forbids the leave of the boy to the place in which people are willing to help him? Who gave the judges the right to order the starving and imprisonment of this defenseless being, until death? Had Great Britain, which during the Second World War battled steadfastly against the Nazi Germany, now, after a few decades, been taken over by ideological descendants of these Nazis? Had Britons forgotten so soon the famous speech of Churchill, who rallying his countryman for the fight against the Hitlerists said „Upon this battle depends the survival of Christian civilization. Upon it depends our own British life, and the long continuity of our institutions and our Empire.”. That battle, fought during the darkest hour of mankind, when Great Britain stood almost alone (with effective support of polish airman) against the Nazi tyranny, was won. Yet it seem that the time has come to conduct it again, because the values to which Churchill appealed to, are today in danger again. This time not by foreign enemies bombing British cities, but by barbarians who took over power in the British judiciary. Barbarians remaining under the influence of radical ideologies, vivid supporters of the Civilization of Death, arrogant outlaws, who maintain they know better what is in the best interest of a little, vulnerable being. Ignoring the will of the parents, as well as offers of help from the Italian doctors, British institutions make themselves appear dangerously similar to the institutions of totalitarian states. It appears that before our very eyes, the visions of British authors are coming true, authors who in their books warned us about criminal societal systems. It appears that in United Kingdom Huxley’s Brave New World is being born, that Orwell’s 1984 is coming. With it’s sentencing of little Alfie to die, Great Britain puts itself outside the circle of civilized countries. If this is how “the rule of law” looks in that country, then it is a good thing that it is leaving the European Community. Since with it’s fascist, barbarian customs it does not fit into the Western Civilization. Yours respectfully, Jakub Kulesza 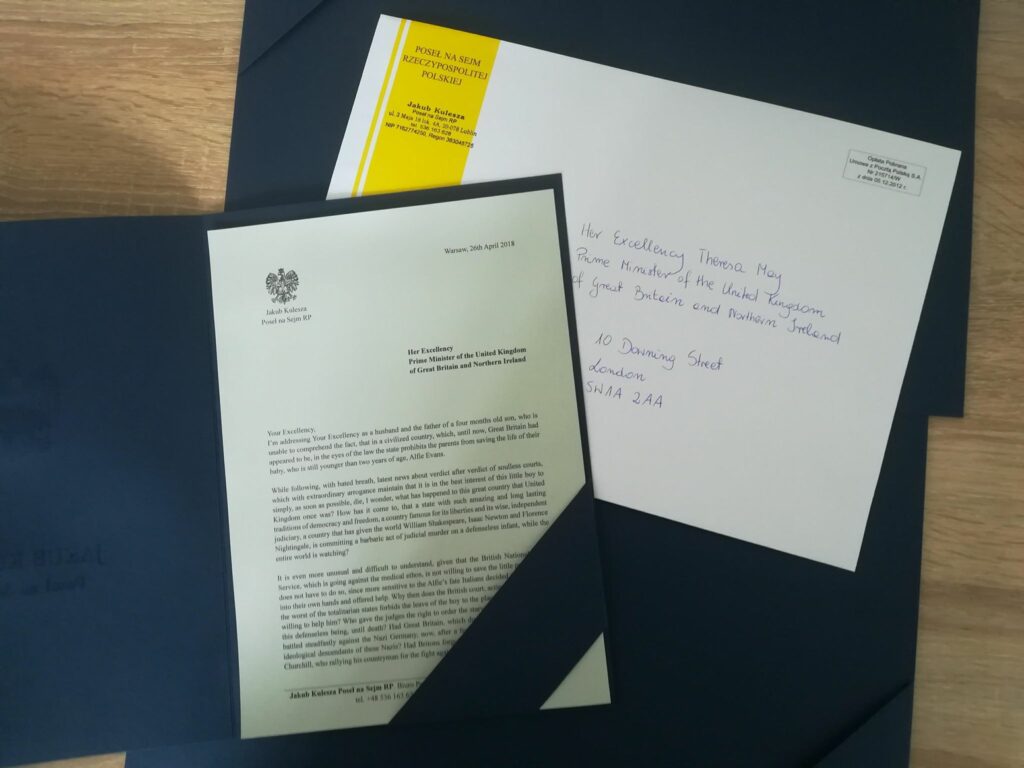 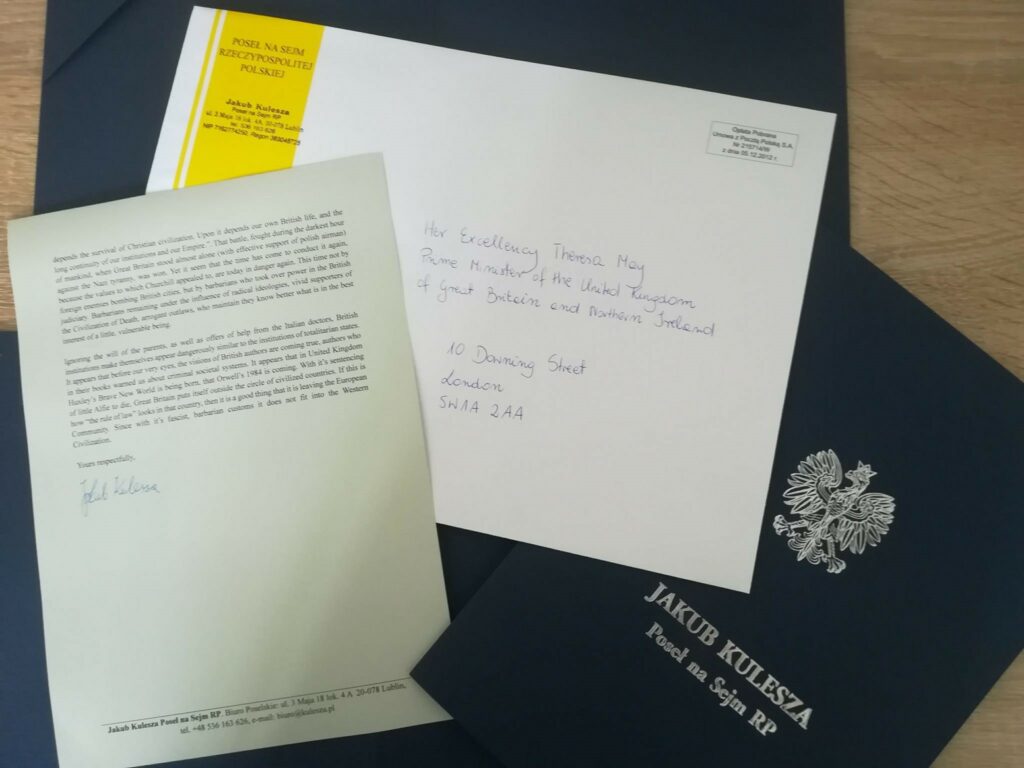